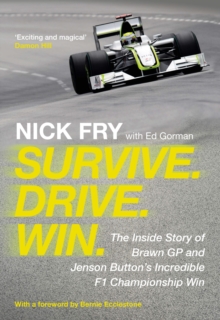 'The story of Brawn GP is legendary... Exciting and magical.' Damon Hill'Nick Fry and Ed Gorman take us behind the mysterious and tightly closed doors of F1 to tell the remarkable story of the 2009 season.' Martin BrundleForeword by Bernie EcclestoneThe full story of F1's incredible 2009 championship battle has never been told.

Until now. In this gripping memoir, Nick Fry, the former CEO of Brawn GP, reveals how he found himself in the driving seat for one of the most incredible journeys in the history of motor sport. At the end of 2008, Nick, then head of Honda's F1 team, was told by his Japanese bosses that the motor company was pulling out of F1 in thirty days.

This bolt from the blue was a disaster for the team's 700 staff, for Ross Brawn, who Nick had recently recruited as chief engineer, and for the drivers, Jenson Button and Rubens Barrichello.

But in a few short weeks, Nick and Ross would persuade Honda to sell them the company for GBP1 (plus all the liabilities).

Just thirteen weeks later, the Brawn GP team, led by Nick and Ross, would emerge from these ashes, win the first Grand Prix of the 2009 season, and go on to win the Driver's and the Constructor's Championship, with a borrowed engine, a heavily adapted chassis and, at least initially, no sponsors. In Survive. Drive. Win., Nick gives an up-close-and-personal account of how he and Ross turned disaster into championship glory and laid the foundations for what was to become the Mercedes-AMG Petronas F1 team.

Along the way he gives the inside track on the drivers, the rivalries between teams, on negotiating with Bernie Ecclestone, on hiring and working with two global superstars: Michael Schumacher and Lewis Hamilton - and offers a unique and thrilling perspective on an elite global sport.