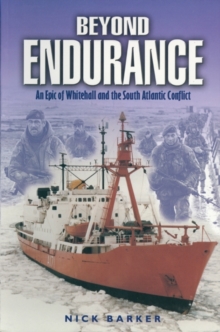 Beyond Endurance: an Epic of Whitehall and the South Atlantic Conflict Paperback / softback

The campaign to re-take the Falkland Islands in 1982, was one of the most remarkable episodes in the long history of British overseas adventures.

Nearly all the books that have appeared in the ensuing years have dealt with the campaign itself.

Nicholas Barker takes a rather different view, concerning himself more with the reason why the British had to fight in what, as he says, has justifiably been called 'a totally unnecessary war'.

No one was better placed than he to blow aside the many smokescreens that have, in his view, been deliberately fanned to obscure the reasons why the war was fought.

For Nick Barker was at the time Captain of Endurance, the only British presence in the South Atlantic.

The Government's decision to dispose of Endurance was seen as a clear signal to the Argentinians that Britain was not committed to the Falkland Islands.

Nick Barker's vivid account of his fight to save his ship, of the life of the South Atlantic and of the part that Endurance played in the Falklands makes enthralling reading.