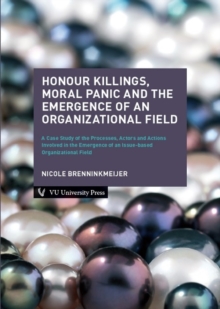 At the beginning of the new millennium, honour-related violence was at the very forefront of public attention in the Netherlands.

The emergence of the issue was facilitated by evolving discourses on multiculturalism and was driven by four events, the shootings of Kezban, Hassan, Zarife and Gul.

This combination of processes contributed to a reconceptualization of domestic violence against migrant women into honour-related violence.

Moreover, the extensive media coverage of these shootings contributed to a moral panic about this issue: honour killings were perceived as a sign of the failing integration of migrants. Together these processes provide an explanation for the widespread public attention for this issue and the emergence of an honour-related violence field.

This case study illustrates that the emergence of an issue-based organizational field is a multi-layered process in which various actors, actions and processes come together and influence each other.