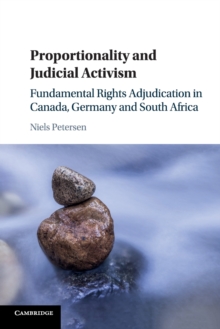 The principle of proportionality is currently one of the most discussed topics in the field of comparative constitutional law.

Many critics claim that courts use the proportionality test as an instrument of judicial self-empowerment.

Proportionality and Judicial Activism tests this hypothesis empirically; it systematically and comparatively analyses the fundamental rights jurisprudence of the Canadian Supreme Court, the German Federal Constitutional Court and the South African Constitutional Court.

The book shows that the proportionality test does give judges a considerable amount of discretion.

However, this analytical openness does not necessarily lead to judicial activism.

Instead, judges are faced with significant institutional constraints, as a result of which all three examined courts refrain from using proportionality for purposes of judicial activism.