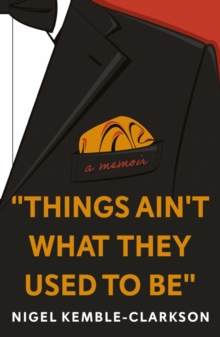 "Things Ain't What They Used to Be" Paperback / softback

Nigel Kemble-Clarkson was born in 1939, the only child of a City ship broker and a portrait painter.

Following a Sussex prep school education, initially during Hitler's 'doodle bugging', he attended Brighton College where sport was the focus of his achievements.

Nigel then thrived during an extended obligatory spell in the Army where he ultimately served with the Royal West African Frontier Force and witnessed Nigerian Independence in 1960.

On returning to civilian life, he became a Lloyd's marine broker, swiftly rising to executive level with extensive international travel duties and also becoming a founder member of the famous (Goldfinger) Posgate syndicate.

In 1975 he set up a highly successful broking company with two colleagues.

Despite a turbulent romantic life, Nigel remains close to eleven children and stepchildren and, now retired, lives with his wife in Isleworth whilst being proud of having been the longest serving full-time broker in Lloyd's of London.