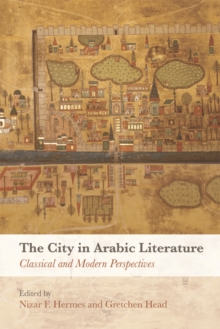 The City in Arabic Literature : Classical and Modern Perspectives Hardback

Addresses the literary representation and cultural interpretation of the city in Arabic literatureThe theme and motif of the city has had an enduring presence in the Arabic-Islamic tradition, from the classical and post-classical literary corpus to modern and post-colonial Arabic poetry and prose.

Cities such as Mecca, Baghdad, Cairo, Damascus, Beirut, Qayrawan, Marrakesh and Cordoba have served as virtual (battle)grounds for some of the Arab world's most complex intellectual, sociocultural, and political issues.

The Arab city has been transformed from a mere physical structure and textual space into an (auto)biographical, novelistic, and poetic arena often troubled and contested for debating the encounter, competition and conflict between the rural and the urban, the traditional and the modern, the meditative and the satiric, the individual and the communal, and the Self and Other(s).Key FeaturesShows how the city has been explored in works of literature by classical and modern 'Arab' authors from different theosophical and ideological backgroundsViews the entirety of the tradition as an evolving continuum, making the collection relevant to scholars of both classical and modern Arabic literatureCovers the central literary genres from the classical period associated with the city, including elegy, eulogy, invective, nostalgic discourses and historiographical accountsChapters on the modern period focus on ideas such as the role played by writing the city in the Moroccan nahdah, everyday writing practices in Beirut and the contradictions and tensions in current literary depictions of the globalized cities of MENAIncludes chapters on many of the most important cities from the medieval and the modern Arab world in Iraq, Syria, Lebanon, Egypt, Tunisia, Morocco, and al-Andalus