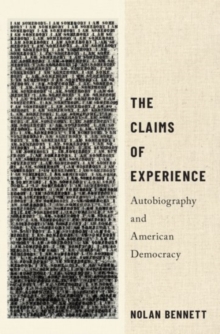 The Claims of Experience : Autobiography and American Democracy Hardback

Why have so many figures throughout American history proclaimed their life stories when confronted by great political problems?

The Claims of Experience provides a new theory for what makes autobiography political throughout the history of the United States and today.

Across five chapters, Nolan Bennett examines the democratic challenges that encouraged a diverse cast of figures to bear their stories: Benjamin Franklin amid the revolutionary era, Frederick Douglass in the antebellum and abolitionist movements, Henry Adams in the Gilded Age and its anxieties of industrial change, Emma Goldman among the first Red Scare and state opposition to radical speech, and Whittaker Chambers amid the second Red Scare that initiated the anticommunist turn of modernconservatism. These historical figures made what Bennett calls a "claim of experience." By proclaiming their life stories, these authors took back authority over their experiences from prevailing political powers, and called to new community among their audiences.

Their claims sought to restore to readers the power to remake and make meaning of their own lives. Whereas political theorists and activists have often seen autobiography to be too individualist or a mere documentary source of evidence, this theory reveals the democratic power that life narratives have offered those on the margins and in the mainstream.

If they are successful, claims of experience summon new popular authority to surpass what their authors see as the injustices of prevailing American institutions and identity.

Bennett shows through historical study and theorization how thisrenewed appreciation for the politics of life writing elevates these authors' distinct democratic visions while drawing common themes across them.

This book offers both a method for understanding the politics of life narrative and a call to anticipate claims of experience as they appeartoday.