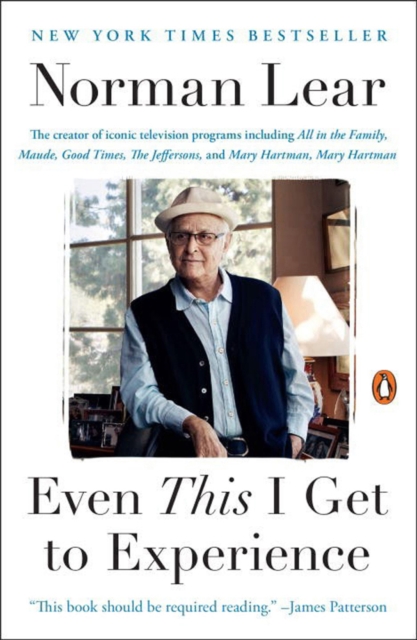 Even This I Get To Experience Paperback / softback

Flat out, one of the best Hollywood memoirs ever written . . . an absolute treasure. Booklist (starred review) In my ninety-plus years I ve lived a multitude of lives.

In the course of all these lives, I had a front-row seat at the birth of television; wrote, produced, created, or developed more than a hundred shows; had nine on the air at the same time; founded the 300,000-member liberal advocacy group People For the American Way; was labeled the no. 1 enemy of the American family by Jerry Falwell; made it onto Richard Nixon s Enemies List; was presented with the National Medal of Arts by President Clinton; purchased an original copy of the Declaration of Independence and toured it for ten years in all fifty states; blew a fortune in a series of bad investments in failing businesses; and reached a point where I was informed we might even have to sell our home.

Having heard that we d fallen into such dire straits, my son-in-law phoned me and asked how I was feeling.

My answer was, Terrible, of course, but then I added, But I must be crazy, because despite all that s happened, I keep hearing this inner voice saying, EventhisI get to experience. Norman Lear s work is legendary. The renowned creator of such iconic television programs asAll in the Family; Maude; Good Times; The Jeffersons;andMary Hartman, Mary Hartman, Lear remade our television culture from the ground up.

At their peak, his programs were viewed by 120 million people a week, with stories that dealt with the most serious issues of the day racism, poverty, abortion yet still left audiences howling with laughter.

In Even This I Get to Experience, Lear opens up with all the candor, humor, and wisdom to be expected from one of America s greatest living storytellers.

But TV and politics are only a fraction of the tale.

Lear s early years were grounded in the harshness of the Great Depression and further complicated by his parents vivid personalities.

The imprisonment of Lear s father, a believer in the get-rich-quick scheme, colored his son s childhood.

During this absence, Lear s mother left her son to live with relatives.

Lear s comic gifts were put to good use during this hard time, as they would be decades later during World War II, when Lear produced and staged a variety show for his fellow airmen in addition to flying fifty bombing missions.

After the war, Lear tried his hand at publicity in New York before setting out for Los Angeles in 1949.

A lucky break had a powerful agent in the audience the night Danny Thomas performed a nightclub routine written by Lear, and within days his career in television began.

Before long, his work with Dean Martin and Jerry Lewis (and later Martha Raye and George Gobel) made him the highest-paid comedy writer in the country, and he was spending his summers with the likes of Carl Reiner and Mel Brooks.

Then came the 70s and Lear s unprecedented string of TV hits.

Married three times and the father of six children ranging in age from nineteen to sixty-eight, Lear s penetrating look at family life, parenthood, and marriage is a volume in itself.

A memoir as touching, funny, and remarkable as any of Lear s countless artistic creations, Even This I Get to Experience is nothing less than a profound gift, endlessly readable and characteristically unforgettable."