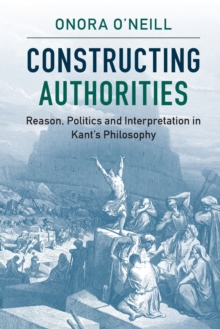 by Onora (University of Cambridge) O'Neill

This collection of essays brings together the central lines of thought in Onora O'Neill's work on Kant's philosophy, developed over many years.

Challenging the claim that Kant's attempt to provide a critique of reason fails because it collapses into a dogmatic argument from authority, O'Neill shows why Kant held that we must construct, rather than assume, the authority of reason, and how this can be done by ensuring that anything we offer as reasons can be followed by others, including others with whom we disagree.

She argues that this constructivist view of reasoning is the clue to Kant's claims about knowledge, ethics and politics, as well as to his distinctive accounts of autonomy, the social contract, cosmopolitan justice and scriptural interpretation.

Her essays are a distinctive and illuminating commentary on Kant's fundamental philosophical strategy and its implications, and will be a vital resource for scholars of Kant, ethics and philosophy of law.