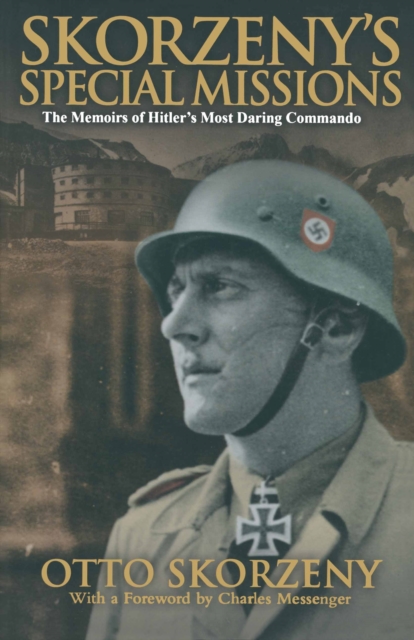 Otto Skorzeny, Germany's top commando in the Second World War, is one of the most famous men in the history of special forces.

His extraordinary wartime career was one of high risk and adventure and here he tells the full story.

Skorzeny quickly proved his worth in Yugoslavia and then Russia.

In 1942 he was awarded the Iron Cross, and in April 1943 he was promoted to captain and named 'Chief of Germany's Special Troops, Existing or to be Created in the Future'.When Mussolini was imprisoned in Italy in 1943, it was Skorzeny who successfully led the daring glider rescue, winning the Knight's Cross and promotion as a result.

Skorzeny's talents were brought into play again when he was sent to Budapest to stop the Hungarian regent Admiral Horthy from signing a peace with Stalin in 1944.

Now dubbed 'the most dangerous man in Europe' by the Allies he was awarded the German Cross in Gold.

A few months later he took a critical role in the Ardennes offensive with a controversial plan to raise a brigade disguised as Americans with captured Sherman tanks.His captured colleagues spread a false rumour that he was planning to assassinate Eisenhower, who was consequently confined to his headquarters for weeks.