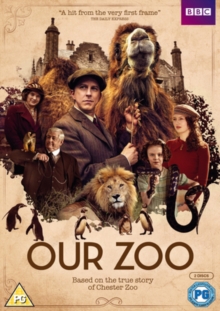 All six episodes from the BBC drama that tells the true story of the Mottershead family who founded Chester Zoo.

George Mottershead (Lee Ingleby) and his wife Lizzie (Liz White) live in a small flat above his father Albert (Peter Wight)'s grocery shop with their daughters Muriel and June (Amelia Clarkson and Honor Kneafsey) but feel it's time to move out and start a life of their own.

When he sees a dilapidated manor in Chester for sale at auction he borrows money from the bank and purchases the land with a view to converting it into a modern zoo where animals are allowed to roam free.

The episodes are: 'The Idea', 'Moving On', 'The Village Rivals', 'The Fund of Chester Zoo', 'In the Middle of a Local War' and 'The Final Decision'.