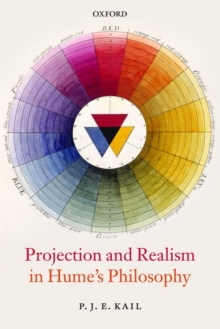 In his writings, Hume talks of our 'gilding and staining' natural objects, and of the mind's propensity to 'spread itself' on the world. This has led commentators to use the metaphor of 'projection' in connection with his philosophy: Hume is held to have taught that causal power and self are projections, that God is a projection of our fear, and that value is a projection of sentiment. By considering what it is about Hume's writing that occasions this metaphor, P. J. E. Kail spells out its meaning, the role it plays in Hume's work, and examines how, if at all, what sounds 'projective' in Hume can be reconciled with what sounds 'realist'. In addition to offering some highly original readings of Hume's central ideas, Projection and Realism in Hume's Philosophyoffers a detailed examination of the notion of projection and the problems it faces.