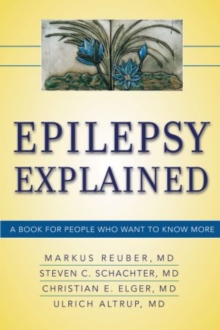 Epilepsy Explained : A Book for People Who Want to Know More Paperback / softback

In the last five years, approximately 2.7 million people have been treated for epilepsy and it is estimated that as much as one in one-hundred of the world's population will develop epilepsy during their lifetime. It is further estimated that 60 million people worldwide have epilepsy and in the United States alone, between seventy to eighty thousand people are newly diagnosed each year. Despite being such a common problem, most people know little about the disorderand people with epilepsy feel stigmatized. Filled with illustrations on almost every page and boasting an attractive and stimulating layout, Epilepsy Explained offers a wealth of crystal clear information on epilepsy, intended for patients, family members, friends, and caregivers.

This down-to-earth book is divided into easy-to-digest sections that address such fundamental questions as what epilepsy is, what happens in different types of epileptic seizures, how epilepsy is diagnosed, and how seizures are treated.

Theauthors include much-needed information on numerous topics, including living successfully with seizures, patients rights, and current drugs used to treat epilepsy-all described with directness and clarity, with many real-life examples that shed light on how the topic under discussion affects people withepilepsy. The book includes information for particular groups of readers such as women, children, and teens. It has an easy-to-follow organization, is clearly structured and has a detailed index and glossary, allowing readers to easily find specific information pertaining to their condition.

Written by physicians who work daily with epilepsy, this clear and engaging book provides people with the knowledge they need to make informed choices about their illness.