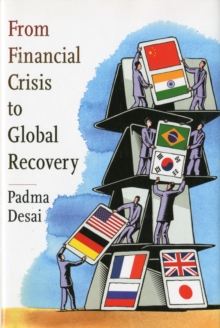 In this book, Padma Desai makes the complexities of economic policy and financial reform accessible to a wide audience.

Merging a compelling narrative with scholarly research, she begins with a systematic breakdown of the factors leading to America's recent recession, describing the monetary policy, tax practices, subprime mortgage scandals, and lax regulation that contributed to the crisis.

She also discusses the Treasury-Fed rescue deals that saved several financial institutions and the involvement of Congress in passing restorative policies.

Desai follows with an analysis of stress tests and other economic measures, and she frankly assesses whether the U.S. economy is truly on the mend. Expanding her view, she considers the prospects for recovery in North America as a whole, as well as in Europe, Asia, and South America, and the extent and value of U.S. and E.U. regulatory proposals. Refocusing on American financial practices, Desai evaluates hedge funds and derivatives, credit default swaps, and rating agencies, pondering whether the dollar can remain a reserve currency. She concludes with a historical comparison of the Great Depression and the Great Recession, weighing the effect of the economic collapse on the future of American capitalism.