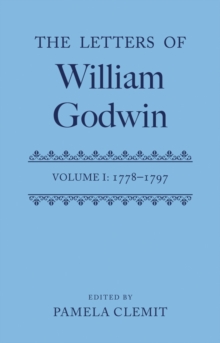 William Godwin became a leading public intellectual during the crisis in British politics which followed the French Revolution.

The impact of his social theories was acknowledged by almost every significant literary figure in Britain for the next quarter-century, and his influence endured much longer in Europe.

He married Mary Wollstonecraft, the early advocate of women's rights, and was the father of Mary Shelley, author of Frankenstein.

All of his lettersare published for the first time in this edition.

The first volume (1778-1797) includes scores of texts newly transcribed from the original manuscripts and given scholarly annotation for the first time.

The letters trace the development of Godwin's personality from his background in English religiousnonconformity, through his early struggle for recognition as a gifted writer, to his years of fame in the 1790s.

They illuminate his most celebrated works, An Enquiry concerning Political Justice (1793) and the novel Caleb Williams (1794); his intervention in the treason trials of 1794; and his relations with publishers.

They reveal his intellectual and emotional mentorship of a succession of creative men and women.

They chart his education in a 'new language' of feelingthrough his courtship of Mary Wollstonecraft, and bear witness to the shock of her early death.

Godwin's letters reflect the cultural history of his times, and throw light on many other literary, political, and artistic figures.

These letters record the personal and professional interactions of an original thinker who hada lasting influence on progressive movements in Britain and Europe, and is still widely read today.