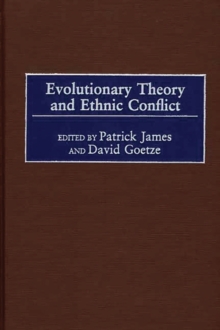 James and Goetze bring together contributors of varied backgrounds, ranging from evolutionary theorists to game theorists to analysts of specific ethnic conflict.

Their work represents a coherent attempt at evaluating the usefulness of evolutionary theories for explaining ethnic phenomena and demonstrates how these theories can be applied in attempts to elucidate real-world behaviors. This study found that kinship theory that posits evolved dispositions to form cooperative bonds with family, ethnic groups and other social groups may go a long way in accounting for the formation of ethnic groups.

Likewise, the description of evolved mechanisms for discerning threat, for building reputations, and for recognizing individuals, groups, and states as possible cooperators and long-term allies may facilitate explanation of the outbreak and avoidance of group conflicts.

This also may explain the design of conscious strategies for conflict prevention and resolution.

Nonetheless, several contributors take a more critical stance and offer ample reason why building these explanations may prove elusive or at least troublesome given the complex character of human societies.

This work is a provocative resource for scholars, students, and other researchers involved with ethnicity and ethnic conflict, international relations, social psychology, and social anthropology.