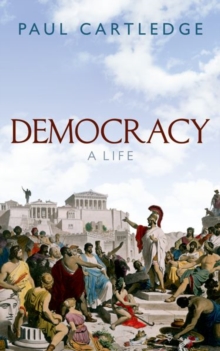 Democracy is either aspired to as a goal or cherished as a birthright by billions of people throughout the world today - and has been been for over a century.

But what does it mean? And how has its meaning changed since it was first coined in ancient Greece?

Democracy: A Life is a biography of the concept, looking at its many different manifestations and showing how it has changed over its long life, from ancient times right through to the present.

For instance, how did the 'people power' of the Athenians emerge in the first place?

Once it had emerged, what enabled it to survive? And how did the Athenian version of democracy differ from the many other forms that developed among the myriad cities of the Greek world?

Paul Cartledge answers all these questions and more, following the development of ancient political thinking about democracy from the sixth century BC onwards, not least the many arguments that were advanced against it over the centuries.

As Cartledge shows, after a golden age in the fourth century BC, there was a long, slow degradation of the original Greek conception and practice of democracy, from the Hellenistic era, through late Republican and early Imperial Rome, down to earlyByzantium in the sixth century CE.

For many centuries after that, from late Antiquity, through the Middle Ages, to the Renaissance, democracy was effectively eclipsed by other forms of government, in both theory and practice.

But as we know, this was by no means the end of the story.

For democracy was eventually to enjoy a re-florescence, over two thousand years after its first flowering in the ancient world: initially revived in seventeenth-century England, it was to undergo a further renaissance in the revolutionary climate oflate-eighteenth-century North America and France - and has been constantly reconstituted and reinvented ever since.