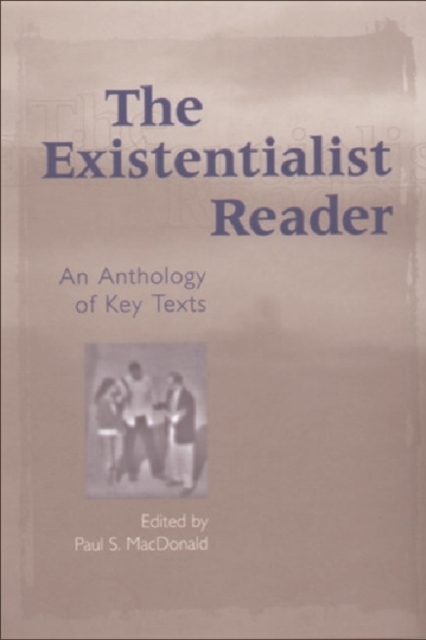 The Existentialist Reader : An Anthology of Key Texts Paperback / softback

In the years between the First and Second World Wars, Existentialist writers and thinkers dramatically reshaped the central topics of immediate intellectual and philosophical concern.

The Existentialists were not so much influenced in a thoughtful, meditative way by the terrible events unfolding about them as they were provoked and threatened by a challenge to dominant worldviews.

Their writings indicated a profound crisis in philosophy itself, as well as European culture at large, and responded to a complex situation which artists, novelists and film-makers also addressed.

They became actively engaged in articulating a new vision that would define the philosopher's own moral and political responsibility, a task which became possible as the consequence of their radically new reassessment of the unique status of human being.

For the Existentialist, a human being is not just a thinking thing, nor an instance of a timeless essence, but a unique manner of existence. The Existentialist Reader is an important addition to the available literature; it offers an anthology of key texts across a broad range of themes by eight Existentialist philosophers: Simone de Beauvoir, Albert Camus, Martin Heidegger, Karl Jaspers, Gabriel Marcel, Maurice Merleau-Ponty, Jose Ortega y Gasset, and Jean-Paul Sartre.

In his comprehensive Introduction, Paul MacDonald describes the intellectual and philosophical scene between the wars and outlines the central characteristics of the various Existentialists' approach to immediate and pressing issues of their time.

After passing the main figures in review, he concentrates on a careful exposition and analysis of distinctively Existentialist themes, such as absurdity, anxiety, alienation and death, and the ways in which the various thinkers diverged in their understanding of human being.

The Introduction leads the reader into the arena of Existentialist argument by carefully situating each philosopher in terms of their relation to other thinkers, both in the previous tradition and in the twentieth century. Features * Broad scope from the inclusion of a wide range of thinkers * Each selection preceded by a synopsis of the writer's life and works, a list of the writer's principal works and suggested further reading * Includes the first publication of several key texts in an edited format