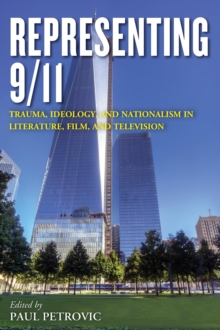 As the horrific events of September 11, 2001, slip deeper into the past, the significance of 9/11 remains a global cultural touchstone.

Initially, filmmakers, writers, and other artists wrangled with its meaning, often relying on fantastical, ethnic, or exceptionalist themes to address the psychic dread of the terrorist attacks.

Over time, however, more nuanced and socio-historical perspectives about 9/11 and its impact on America and the world have emerged.

In Representing 9/11: Trauma, Ideology, and Nationalism in Literature, Film, and Television, prominent authors from a variety of disciplines demonstrate how emergent American and international texts expand upon and complicate the initial post-9/11 canon.

Editor Paul Petrovic has assembled a collection of essays that broadens our understanding of how popular culture has addressed 9/11, particularly as it has evolved over time.

Contributors bring fresh readings to popular novels, such as Jonathan Lethem's Chronic City and Jonathan Franzen's Freedom; films like Zero Dark Thirty and This Is the End; and television shows such as 24 and Homeland.

Showcasing a diverse range of viewpoints, essays in this collection assess, among other topics, how African American identity is challenged by post-9/11 allegories; how superhero films foretell the inevitability of city-wide destruction by terrorists; and how shows like Breaking Bad problematize ideas of liberalism and masculinity.

Though primarily aimed at scholars, Representing 9/11 seeks to engage readers interested in how various forms of media have interpreted the events and aftermath of the terrorist attacks in 2001.