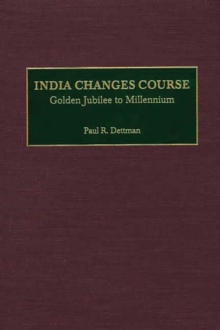 This study describes and analyzes the significant political events that occurred between the fiftieth anniversary of Indian Independence and the coming of the third millennium.

It challenges much of the prevailing public image of India based upon the mistaken notion that it is still the country of Mahatma Gandhi and Jawaharlal Nehru.

Nehru's principle that India should be a secular state has been lost, and it has become a country dominated by Hindu communalism.

Mahatma Gandhi's non-violence has been forgotten, and India has built what will soon be the third largest military force in the world, including nuclear weapons.

The caste-less society that was identified in its Constitution as one of free India's goals has become a society in which the salience of caste membership is greater today than in 1947. Dettman examines events during the thirty months from August 1997 to January 2000 on the political, economic, and military fronts.

During this period, the continuing skirmishes with Pakistan along the Line of Control in Kashmir escalated into a short, high altitude war that ended with Indo-Pakistan relations at their lowest ebb since the Bangladesh War of 1971.

India's decision to allocate vast resources to building up its armed forces and supplying them with nuclear weapons will greatly diminish the government's support for the demographic, environmental, and social welfare programs that are needed to avoid a long-term degradation of its quality of life.