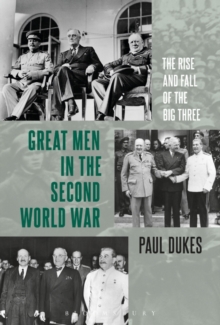 Great Men in the Second World War : The Rise and Fall of the Big Three Paperback / softback

Great Men in the Second World War provides a new perspective on the role of the individual in history.

Paul Dukes selects five Great Men, each in his turn one of the leaders of the three victorious powers, the UK, the USA and the USSR.

The identity of the Big Three changed significantly during the last months of the conflict.

Roosevelt died in April 1945 and was succeeded by Truman.

Churchill lost the general election to Attlee in July.

Stalin alone provided continuity throughout the conferences of the Big Three, and immediately beyond. The book explores the power of these individuals, asking such questions as:-To what extent did the leaders exert their own influence and to what extent could they be considered to be spokesmen for their countries?-How significant was it that Truman and Attlee had less colourful personalities than Roosevelt and Churchill?-Was Stalin uniquely bad while the others were good?Drawing in particular on the record of their interaction at the Tehran, Yalta and Potsdam Conferences, but also making use of other sources including novels as well as works of history, Paul Dukes sheds light on both the major statesmen involved and the nature of the Second World War.

This is a book that will be useful for students of the Second World War and anyone with an interest in the role of individuals in history.