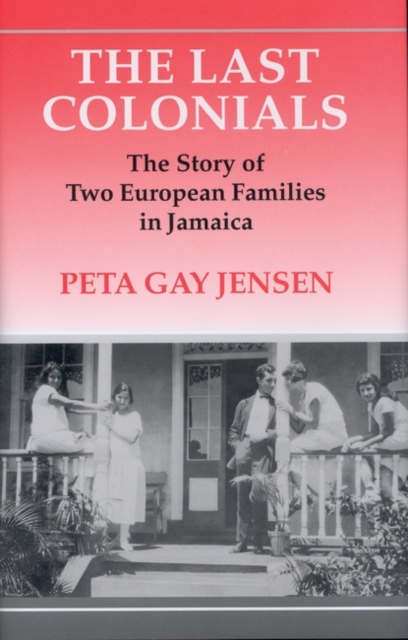 The Last Colonials : The Story of Two European Families in Jamaica Hardback

In 1844, an eighteen-year-old German named Karl Stockhausen disembarked at the sugar port of Falmouth in Jamaica with hopes of success in the New World.

A few years earlier and only slightly older, the young journalist James Otway Clerk arrived in Jamaica from Scotland.

These men and their descendants would see great changes sweep the island as it struggled with the legacies of the slave economy and moved towards independence Far from the fantasy world of luxurious plantations and colonial mansions, The Last Colonials gives a rare insight into the lives of the Stockhausen and Clerk families and of their white Jamaican descendants.

Set against the historical background of post-slavery Jamaica, Peta Gay Jensen's lively narrative recounts her family's history from their arrival as late settlers, their initial success in adapting through rapid commitment to their new country, and the challenges they faced when attempting to integrate fully into Jamaican culture.

Jensen tells of the issues confronting the Stockhausens as they started their own plantation, and the early days of the Clerk family's life in Kingston. With the collapse of the plantation economy, the Stockhausen young people moved to Kingston to live with the Clerks - close family friends - making it almost inevitable that the two families would merge.

Through four generations we follow their fortunes and their efforts to explore and help preserve Jamaica's then little valued African heritage.

With wit and verve, Jensen paints a colourful picture of her pioneering relatives and daily life in her family's country home at the beginning of the last century, and her own memories of trips to the market, Christmas day, hurricanes and earthquakes.

A vivid portrait of Jamaica after the abolition of slavery, The Last Colonials gives a unique insight into imperialism in the New World and the complexity of a colonial society struggling towards its independence.