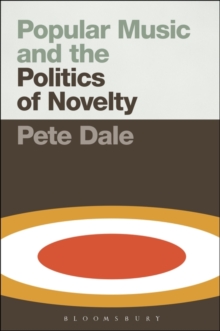 Popular Music and the Politics of Novelty Paperback / softback

Popular music, today, has supposedly collapsed into a 'retromania' which, according to leading critic Simon Reynolds, has brought a 'slow and steady fading of the artistic imperative to be original.' Meanwhile, in the estimation of philosopher Alain Badiou, a significant political event will always require 'the dictatorial power of a creation ex nihilo'.

Everywhere, it seems, at least amongst commentators of a certain age and type, pessimism prevails with regards to the predominant aesthetic preferences of the twenty first century: popular music, supposedly, is in a rut. Yet when, if ever, did the political engagement kindled by popular music amount to more than it does today?

The sixties? The punk explosion of the late 1970s? Despite an on-going fixation upon these periods in much rock journalism and academic writing, this book demonstrates that the utilisation of popular music to promote political causes, on the one hand, and the expression of dissent through the medium of 'popular song', on the other hand, remain widely in practice today. This is not to argue, however, for complacency with regards to the need for expressions of political dissent through popular culture.

Rather, the book looks carefully at actual usages of popular music in political processes, as well as expressions of political feeling through song, and argues that there is much to encourage us to think that the demand for radical change remains in circulation.

The question is, though, how necessary is it for politically-motivated popular music to offer aesthetic novelty?