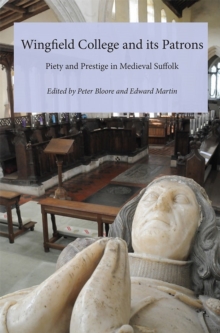 Wingfield College and its Patrons : Piety and prestige in medieval Suffolk Hardback

The 650th anniversary of the foundation of Wingfield College was the occasion for a special two-day symposium marking the culmination of a three-year UEA-funded research project into the college and castle.

The building projects of the late medieval aristocracy focused on their homes and the monasteries, churches or chantry foundations under their patronage where their family were buried and commemorated. This commemoration allowed a visual celebration of their achievements, status and lineage, the scale and prestige of which reflected on the fortunes of the family as a whole.

Wingfield is explored in the context of both the actual building of the castle, chantry chapel and the college, and that of the symbolic function of these as a demonstration ion of aristocratic status. The contributions to this book examine many topics which have hitherto been neglected, such as the archaeology of the castle, which had never been excavated, the complex history of the college's architecture, and the detailed study of the monuments in the church.

The latest techniques are used to reconstruct the college and castle, with a DVD to demonstrate these. And the context of the family and its fortunes are explored in chapters on the place of the de la Poles in fifteenth century history, as soldiers, administrators and potential claimants to the throne.