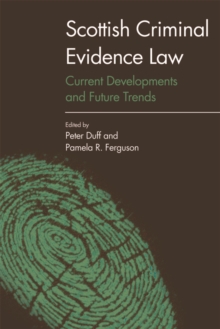 These ad hoc developments are fundamentally altering the basic principles of Scottish criminal evidence which have been in place since the 19th century.

This book gathers leading experts in the field to analyse these changes, discern any patterns and ask what the ramifications are for the future of Scottish criminal evidence law.

The areas affected include: police questioning of suspects, the treatment of vulnerable witnesses in court, hearsay, the admissibility of the accused's previous convictions, the Crown's duty of disclosure and the need for corroboration.