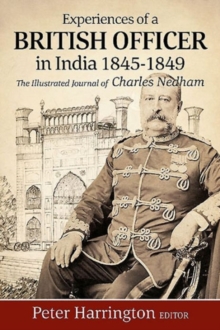 Experiences of a Young British Officer in India, 1845-1849 : The Illustrated Journal of Charles Nedham Paperback / softback

Charles Nedham was just twenty when he arrived in India in July 1845 as an ensign in HM 10th Foot.

For the next four and a half years he lived as a young officer on duty in the sub-continent, finally seeing action in the Second Sikh War at the siege of Multan and the battle of Gujerat.

His journal which he illustrated with fine pencil drawings of various sites and buildings offers glimpses of life in peace and war in India, as well as the contempt and prejudices shown by the British towards the native population.

He was equally cynical and critical towards a number of the British commanders for their poor handling of the campaign.

The journal provides a window into attitudes towards the empire, as well as the life of a bachelor officer in the early 19th century.