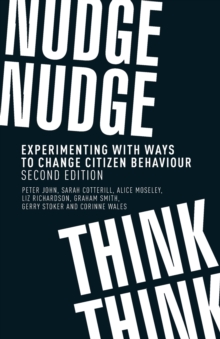 How can governments persuade their citizens to act in socially beneficial ways?

This ground-breaking book builds on the idea of 'light touch interventions' or 'nudges' proposed in Richard Thaler and Cass Sunstein's highly influential Nudge (2008).

While recognising the power of this approach, it argues that an alternative also needs to be considered: a 'think' strategy that calls on citizens to decide their own priorities as part of a process of civic and democratic renewal.

As well as setting out these divergent approaches in theory, the book provides evidence from a number of experiments to show how using 'nudge' or 'think' techniques works in practice. Updated and rewritten, this second edition features a new epilogue that reflects on recent developments in nudge theory and practice, introducing a radical version of nudge, 'nudge plus'.

There is also a substantial prologue by Cass Sunstein. -- .