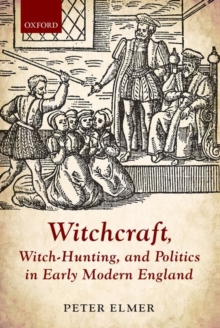 Witchcraft, Witch-hunting, and Politics in Early Modern England constitutes a wide-ranging and original overview of the place of witchcraft and witch-hunting in the broader culture of early modern England.

Based on a mass of new evidence extracted from a range of archives, both local and national, it seeks to relate the rise and decline of belief in witchcraft, alongside the legal prosecution of witches, to the wider political culture of the period.

Buildingon the seminal work of scholars such as Stuart Clark, Ian Bostridge, and Jonathan Barry, Peter Elmer demonstrates how learned discussion of witchcraft, as well as the trials of those suspected of the crime, were shaped by religious and political imperatives in the period from the passage of the witchcraftstatute of 1563 to the repeal of the various laws on witchcraft.

In the process, Elmer sheds new light upon various issues relating to the role of witchcraft in English society, including the problematic relationship between puritanism and witchcraft as well as the process of decline.