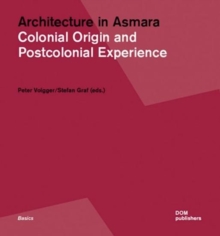 The ancient city of Asmara is the capital of Eritrea and its largest settlement.

Its beautiful architecture was rediscovered by outsiders in the early 1990s.

In this book, the authors offer an original analysis of the colonial city, providing a history not only of the physical and visible urban reality, but also of a second, invisible city as it exists in the imagination.

The colonial city becomes a fantastical set of cities where each one reflects the others as if in a kaleidoscope.

This ambitious book breaks new ground, and moves us a little further along in the attempt to read Asmara into contemporary theory. This book brings together scholars from a multiplicity of disciplines who have shown the ways in which colonial and postcolonial criticism has served as a platform for new, diversified readings of Asmara, which compile cultural and social history, critical and political theory, anthropological fieldwork, visual culture studies, literary and cinematic analysis, gender studies, diaspora and urban studies. The book examines the current realities of Asmara in order to address the continuing effects of the legacy of colonialism upon the city dwellers.