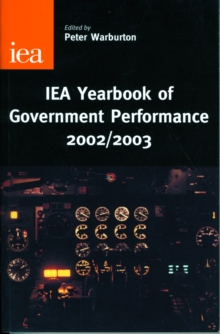 Big government may be coming back into fashion. Public spending in Britain -- especially on services such as health, education and transport -- is on the increase.

But how likely is it that more spending will result in better services?

In this new Yearbook, Peter Warburton assembles evidence from Britain and from around the world to examine how taxation and government spending have been changing and to assess the effectiveness of government activity.

He investigates the scale and scope of government, over time and in comparison with other countries, and sets out indicators of government performance, considering not only macroeconomic questions but issues now at the centre of political discussion such as health and education services and crime reduction.

Dr Warburton's concludes that 'If there is a simple message to be gleaned from all the evidence, it is that an increase in public sector resources is no substitute for excellence in resource allocation.'