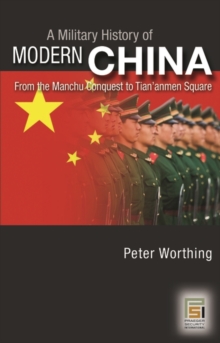 A Military History of Modern China : From the Manchu Conquest to Tian'anmen Square Hardback

War and the military have played central roles in shaping modern Chinese history.

Worthing demonstrates how these factors have figured decisively in the rise and fall of imperial dynasties, the suppression of internal revolts, the emergence of revolutionary movements, the conduct of China's foreign relations, the development of political parties, the structure of governments, the rise of nationalism and the drive for modernization, all of which have shaped so much of China's modern history. War and the military have played central roles in shaping modern Chinese history.

As Worthing demonstrates, the consequences of war and defeat, in both internal and external conflicts, have largely determined the course of history in China, especially in the period since the rise of the Manchu dynasty in the 17th century.

Understanding the military history of China is, therefore, essential to an understanding of the Chinese state that is now emerging as a 21st-century military and economic power. Organized chronologically, this book is divided into three sections designed to reveal the manner in which war and the military have influenced the course of Chinese history.