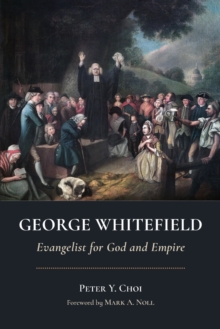 Part of the Library of Religious Biography (LRB) series

Narrates the drama of a famous preacher's entire career in his historical context.

George Whitefield (1714-1770) is remembered as a spirited revivalist, a catalyst for the Great Awakening, and a founder of the evangelical movement in America.

But Whitefield was also a citizen of the British Empire who used his political savvy and theological creativity to champion the cause of imperial expansion.

In this religious biography of "the Grand Itinerant," Peter Choi reexamines the Great Awakening and its relationship to a fast-growing British Empire in the context of a dramatic human story.

Choi shows that as the British Empire and the Great Awakening evolved, so did Whitefield and his influence.

Rather than focusing on his early preaching career, as many books do, Choi follows the trajectory of Whitefield's whole life, including his relation-ships to Britain, the American colonies, slavery, war, and higher education.

George Whitefield: Evangelist for God and Empire tells the fascinating, multifaceted life story of Whitefield both as revivalist preacher and subject of the British Empire.