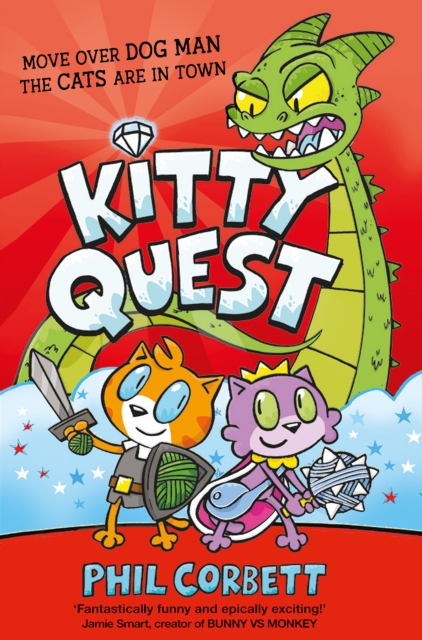 'Fantastically funny and epically exciting! Kitty Quest is a ridiculous thrill from start to finish!' - Jamie Smart, creator of the Bunny vs.

Monkey series 'So funny! Phil Corbett is a genius!' - Rob Biddulph, author of Draw With Rob Dog Man meets the Lord of the Rings in this laugh-out-loud graphic novel debut about two aspiring adventurers who face off against startling ghosts, rampaging monsters and bumbling wizards!

This is the perfect new read for fans of Captain Underpants, Dog Man and The Simpsons!Woolfrik and Perigold are two down-on-their-luck cats in need of some extra cash, so they've decided to become professional monster slayers - except they don't know the first thing about it!

So when a huge beast starts rampaging through the town, they are put to the ultimate test. But the monster is just the beginning of their worries, because someone even more troublesome is pulling its strings.

So even though they've never been in a battle - or even gone on a real quest before - it's up to these cats to save the day and prove they've got what it takes to be heroes. 'Fun, fast-paced and hilarious. Kitty Quest is a must-read - especially if you love a good cat-pun!' - Laura Ellen Anderson, author of Amelia FangMatt Braly, creator of Disney's Amphibia, proclaims Kitty Quest is 'an absolutely charming story that had me chuckling the whole way through.

I couldn't put it down!' 'A hilarious, magical and downright silly story about some paws-itively delightful heroes!