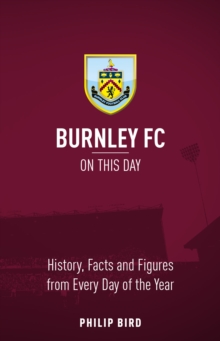 Burnley FC On This Day : History, Facts & Figures from Every Day of the Year Hardback

Burnley On This Day revisits the most magical and memorable moments from the club's illustrious history, mixing in a maelstrom of anecdotes and characters to produce an irresistible Clarets diary - with an entry for every day of the year.

From the club's Victorian origins as a Football League founder member to the Premier League era, the Clarets' rollercoaster journey has seen them become one of only four clubs to win every division of the Football League.

Remember the incredible First Division title wins of 1921 and 1960.

Look back at the famous 1987 win over Orient that preserved Burnley's Football League status, and recall the recent fabulous promotions to the Premier League.

Read how this club from industrial Lancashire roots fought its way back from near oblivion to sit once more among the elite.