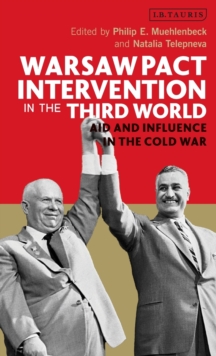 Warsaw Pact Intervention in the Third World : Aid and Influence in the Cold War Hardback

It was long assumed that the Soviet Union dictated Warsaw Pact policy in Africa, Asia, the Middle East and Latin America (known as the 'Third World' during the Cold War).

Although the post-1991 opening of archives has demonstrated this to be untrue, there has still been no holistic volume examining the topic in detail.

Such a comprehensive and nuanced treatment is virtually impossible for the individual scholar thanks to the linguistic and practical difficulties in satisfactorily covering all of the so-called 'junior members' of the Warsaw Pact.

This important book fills that void and examines the agency of these states - Czechoslovakia, the German Democratic Republic, Poland, Hungary, Bulgaria and Romania - and their international interactions during the 'discovery' of the 'Third World' from the 1950s to the 1970s.

Building upon recent scholarship and working from a diverse range of new archival sources, contributors study the diplomacy of the eastern and central European communist states to reveal their myriad motivations and goals (importantly often in direct conflict with Soviet directives). This work, the first revisionist review of the role of the junior members as a whole, will be of interest to all scholars of the Cold War, whatever their geographical focus.