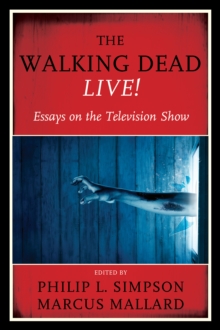 The Walking Dead Live! : Essays on the Television Show Hardback

In 2010, The Walking Dead premiered on AMC and has since become the most watched scripted program in the history of basic cable.

Based on the graphic novel series by Robert Kirkman, The Walking Dead provides a stark, metaphoric preview of what the end of civilization might look like: the collapse of infrastructure and central government, savage tribal anarchy, and purposeless hordes of the wandering wounded.

While the representation of zombies has been a staple of the horror genre for more than half a century, the unprecedented popularity of The Walking Dead reflects an increased identification with uncertain times. In The Walking Dead Live! Essays on the Television Show, Philip L. Simpson and Marcus Mallard have compiled essays that examine the show as a cultural text.

Contributors to this volume consider how the show engages with our own social practices-from theology and leadership to gender, race, and politics-as well as how the show reflects matters of masculinity, memory, and survivor's guilt. As a product of anxious times, The Walking Dead gives the audience an idea of what the future may hold and what popular interest in the zombie genre means.

Providing insight into the broader significance of the zombie apocalypse story, The Walking Dead Live! will be of interest to scholars of sociology, cultural history, and television, as well as to fans of the show.