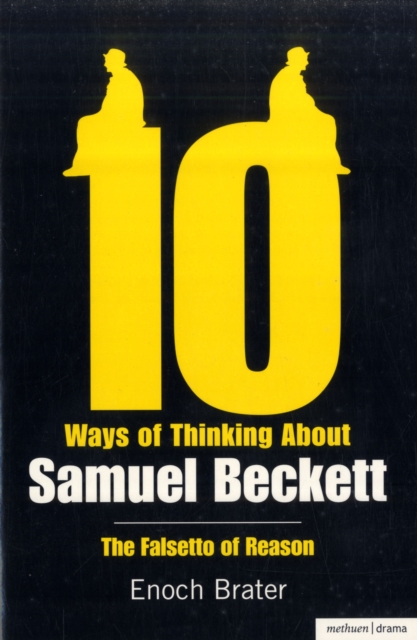 Ten Ways of Thinking About Samuel Beckett : The Falsetto of Reason Paperback / softback

Part of the Diaries, Letters and Essays series

Beckett is acknowledged as one of the greatest playwrights and most innovative fiction writers of the twentieth century with an international appeal that bridges both general and more specialist readers.

This collection of essays by renowned Beckett scholar Enoch Brater offers a delightfully original, playful and intriguing series of approaches to Beckett's drama, fiction and poetry.

Beginning with a chapter entitled 'Things to Ponder While Waiting for Godot', each essay deftly illuminates aspects of Beckett's thinking and craft, making astute and often surprising discoveries along the way.

In a series of beguiling discussions such as 'From Dada to Didi: Beckett and the Art of His Century', 'Beckett's Devious Interventions, or Fun with Cube Roots' and 'The Seated Figure on Beckett's Stage', Brater proves the perfect companion and commentator on Beckett's work, helping readers to approach it with fresh eyes and a renewed sense of the author's unique aesthetic. 'An eloquent, witty and erudite collection of essays that illuminates Beckett's drama and prose fiction from a number of complementary perspectives.

Brater's precise explication of the interwoven tropes of language and mise-en-scene is combined with a fine grasp of the overarching structure of work ... to create a rich and suggestive series of reflections on Beckett's aesthetics.' - Robert Gordon, Professor of Drama, Goldsmiths, University of London