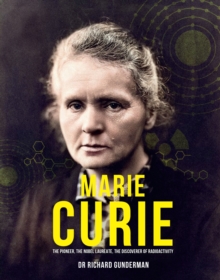 Marie Curie coined the term 'radioactivity', and it is to her and her husband, Pierre Curie, that we owe much of our current understanding of the very fabric of reality.

Born in Warsaw, Marie was the fifth and youngest child of teachers.

Her father taught mathematics and science, for which she showed an early affinity, and she later went to study in Paris, where she met Pierre.

The work they did together revolutionized modern science.

As well as discovering the atomic rather than chemical nature of radioactivity, the Curies isolated two new elements: polonium and radium.

This biography does full justice to the scientific and human aspects of Marie's life, detailing her tumultuous personal history at a time of social upheaval, and her struggle to gain recognition in an era when female scientists were almost unknown.

Marie Curie died in 1934, succumbing to aplastic anaemia that may have stemmed from her scientific investigations.

Her example continues to inspire millions of people across the world.