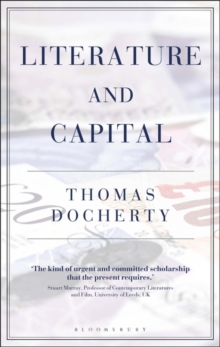 What is the value of literature? In this important new work, Thomas Docherty charts a new economic history of literary culture and its institutions in the modern age.

From the literary patronage of the early modern period, through the colonial exploitation of the 18th and 19th centuries to the institutionalisation of "literature" in the neoliberal university of the 21st century, Literature and Capital explores the changing ways in which literary culture has both resisted and become complicit with exploitative economic notions of value. Drawing on the work of economic and political thinkers such as Thomas Piketty, Naomi Klein, Edward Said and Raymond Williams, the book includes readings of work by a wide range of canonical authors from Shakespeare, Donne and Swift to Tolstoy, Woolf and Ishiguro.