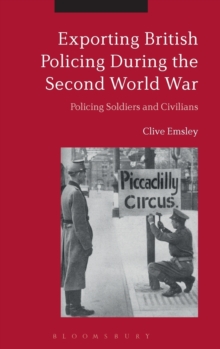 Exporting British Policing is a comprehensive study of British military policing in liberated Europe during the Second World War.

Preventing and detecting thefts, receiving and profiteering together with the maintenance of order in its broadest sense are, in the peacetime world, generally confided to the police.

However, the Second World War witnessed the use of civilian police to create a detective division of the British Army's Military Police (SIB), and the use of British civilian police, alongside American police, as Civil Affairs Officers to restore order and civil administration. Part One follows the men of the SIB from their pre-war careers to confrontations with mafiosi and their investigations into widespread organised crime and war crimes during which they were constantly hampered by being seen as a Cinderella service commanded by 'temporary gentlemen'.

Part Two focuses on the police officers who served in Civil Affairs who tended to come from higher ranks in the civilian police than those who served in SIB.

During the war they occupied towns with the assault troops, and then sought to reorganise local administration; at the end of the war in the British Zones of Germany and Austria they sought to turn both new Schutzmanner and police veterans of the Third Reich into British Bobbies. Using memoirs and anecdotes, Emsley critically draws on the subjective experiences of these police personnel, assessing the successes of these wartime efforts for preventing and investigating crimes such as theft and profiteering and highlighting the importance of historical precedent, given current difficulties faced by international policing organizations in enforcing democratic police reform in post-conflict societies.