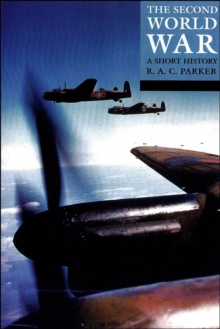 The Second World War is a compact but comprehensive and absorbing history of the war.

It examines the causes of the war, how it was won and lost, and its far-reaching consequences for humanity.

In tracing the key events of both the European and the Far Eastern wars, R.

A. C. Parker outlines clearly the strategies of the participants, the economies and societies that underlay them, and the strengths and weaknesses of their fighting forces.

He describes the decisivebattles and analyses the reasons for their outcome, paying close attention to special features of the war: mobile warfare, forced migration, the Holocaust, strategic and nuclear bombing.

Unlike many other histories of the war this book places British and European involvement squarely in aninternational perspective, and the author never shies away from raising fundamental questions.