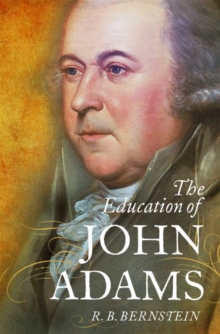 The Education of John Adams Hardback

It examines his origins in colonial Massachusetts, his education, and his struggle to choose a career and define a place for himself in colonial society.

It explores his flourishing legal career and the impact that law had on him and his perception of himself; his growing involvement with the emerging American Revolution aspolemicist, as lawyer, as congressional delegate, and as diplomat; and his role in defining and expounding ideas about constitutionalism and how it should work as the governing ideology of the new United States.

The book traces his part in launching the new government of the United States under the U.S.

Constitution;his service as the nation's first vice president and second president; and his retirement years, during which he passed from being a vexed and rejected ex-president to the Sage of Braintree.

It describes the relationships that sustained him-with his wife, the brilliant and eloquent Abigail Adams; with his children; with such allies and supporters as Benjamin Rush and John Marshall; such sometime friends and sometime adversaries as Benjamin Franklin, George Washington, and Thomas Jefferson; andwith such foes as Alexander Hamilton and Timothy Pickering.

It establishes Adams as a key but neglected figure in the evolution of American constitutional theory and practice.

It also is the first biography to examine Adams's conflicted and hesitant ideas about slavery and race in the Americancontext, raising serious questions about his mythic status as a friend of human equality and a foe of slavery.

The focus of this book is the record left by Adams himself - in diaries, letters, essays, pamphlets, and books.

The Education of John Adams concludes by re-examining the often-debated question of the relevance of Adams's thought to our own time.