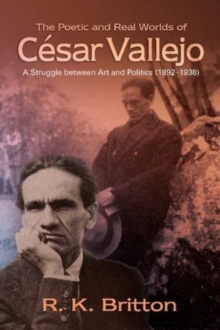 The study of his life and work has encountered problems since the 1950s, stemming from the fact that half of his writing was published posthumously under editorship of doubtful accuracy.

The matter is further complicated in that his non-poetic work has been neglected in favour of his verse.

A Struggle between Art and Politics reviews the evidence -- literary and historical -- now reliably to hand, and assesses the often conflicting body of opinion his work has generated.

Three essential questions are pertinent: Where should Vallejo be placed in the canon of twentieth-century modernism?

What effect did his mid-life conversion to Communism have on his writing?

How should his prose fiction, journalism and essays be assessed in relation to his poetry?

There are few writers whose literary output follows the twists and turns of their lives more closely than Cesar Vallejo's.

This new, comparative study maps his career onto the cultural, social, political and historical backdrop to his life in Peru, France, Spain and Russia, and analyses his writings in the light of his life circumstances.

Vallejo's journey from Peru, the cultural "periphery", to the "centre" of inter-war Paris, his experience of European capitalism during the Depression, and the confrontation of Communism and Fascism, ultimately played out in the Spanish Civil War, forced him to wage a personal struggle to reconcile art with life and politics.

This challenge is fought out in different ways in his various writings, but nowhere more movingly, passionately and humanely than in his posthumous poetry.