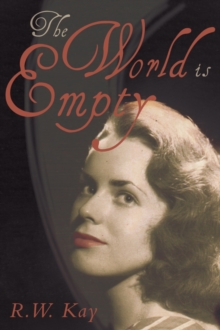 The World is Empty Paperback / softback

R.W. Kay's fourth novel, The World is Empty, focuses on the two stories that can be told over the course of a relationship: hers and his.

Mia and Mike became engaged in their twenties. Mia, an air hostess, was twenty-six while Mike was a maths graduate training to be a teacher, aged twenty-two.

After a year long engagement, circumstances conspired that their relationship ended and they lost all contact with each other.

They married, began families and their time together became a distant memory.

They never saw each other for nigh on forty years until meeting accidentally.

Very rapidly, they realised their bond had never been broken.

As they reminisced, it became clear that they did not share the same memories.

On their first Sunday together in 1963, Mia had forgotten she had taken Mike to morning mass.

As it was his first time inside a Roman Catholic church, he remembered the occasion vividly.

Later, when they sat together watching Reginald Dixon playing the organ in Blackpool's Tower Ballroom, Mike couldn't recall the event at all!

As their love reignites, responsibilities, passion and morality begin to dominate their lives...