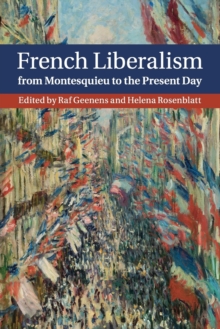 French Liberalism from Montesquieu to the Present Day Paperback / softback

There is an enduring assumption that the French have never been and will never be liberal.

As with all cliches, this contains a grain of truth, but it also overlooks an important school of thought that has been a constant presence in French intellectual and political culture for nearly three centuries: French political liberalism.

In this collaborative volume, a distinguished group of philosophers, political theorists and intellectual historians uncover this unjustly neglected tradition.

The chapters examine the nature and distinctiveness of French liberalism, providing a comprehensive treatment of major themes including French liberalism's relationship with republicanism, Protestantism, utilitarianism and the human rights tradition.

Individual chapters are devoted to Montesquieu, Tocqueville, Aron, Lefort and Gauchet, as well as to some lesser known, yet important thinkers, including several political economists and French-style 'neoliberals'.

French Liberalism from Montesquieu to the Present Day is essential reading for all those interested in the history of political thought.