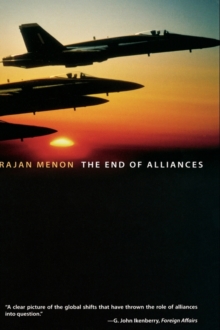 The End of Alliances Hardback

Why should the United States cling to military alliances established during the Cold War when the circumstances are now fundamentally different?

In The End of Alliances Rajan Menon makes the bold claim that our alliances in Europe and Asia have become irrelevant to the challenges the United States faces today and are slowly dissolving as a result. The dissolution of our alliances will not, Menon emphasizes, culminate in isolationism.

The United States will, and must, be actively involved beyond its borders, but by relying on contingent alignments and on coalitions whose membership will vary depending on the issue at hand.

America, he reminds us, engaged the world in a variety of ways for more than 150 years before entering into formal military alliances after World War II.

While a strategy that ceases to rely on alliances will mark adramatic shift in American foreign policy, states routinely reassess and reorient their strategies.

The United States, which studiously avoided alliances for much of its history only to embrace them during the Cold War, is no exception. The End of Alliances predicts that the coming change in American strategy will force our traditional allies to rethink their choices and create new patterns in world politics.

The controversial argument advanced by Menon will provoke debate among foreign policy specialists and the general public.