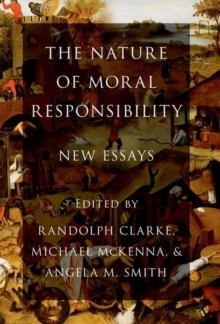 What is it to be morally responsible for something?

Indeed, some theorists claim to distinguish several varieties of moral responsibility, with different conditions that must be satisfied if one is to bear responsibility of one or another of these kinds. Debate on this point turns partly on disagreement about the kinds of responses made appropriate when one is blameworthy or praiseworthy.

It is generally agreed that these include "reactive attitudes" such as resentment and gratitude, but theorists disagree about the nature of these attitudes.

They dispute the connections between moral responsibility, desert, and the justification of punishment as well.

Many theorists take it that, whatever the appropriate responses are, they are responses to an agent's "quality of will," but there is no consensus on what this comes to.

Are the agent's beliefs about the moral status of her behavior what matter, or is it what she cares about, or what she judges important?This volume presents twelve original essays from participants in these debates.

The contributors include prominent established figures as well as influential younger philosophers.

A substantive introduction by the editors surveys recent debates and situates the contributions within it.