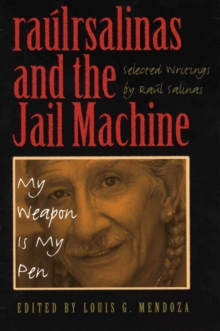 raulrsalinas and the Jail Machine : My Weapon Is My Pen Paperback / softback

Part of the CMAS History, Culture, and Society Series series

Raul R. Salinas is regarded as one of today's most important Chicano poets and human rights activists, but his passage to this place of distinction took him through four of the most brutal prisons in the country.

His singular journey from individual alienation to rage to political resistance reflected the social movements occurring inside and outside of prison, making his story both personal and universal. This groundbreaking collection of Salinas' journalism and personal correspondence from his years of incarceration and following his release provides a unique perspective into his spiritual, intellectual, and political metamorphosis.

The book also offers an insider's view of the prison rebellion movement and its relation to the civil rights and anti-war movements of the 1960s and 1970s.

The numerous letters between Salinas and his family, friends, and potential allies illustrate his burgeoning political awareness of the cause and conditions of his and his comrades' incarceration and their link to the larger political and historical web of social relations between dominant and subaltern groups.

These collected pieces, as well as two interviews with Salinas-one conducted upon his release from prison in 1972, the second more than two decades later-reveal to readers the transformation of Salinas from a street hipster to a man seeking to be a part of something larger than himself.

Louis Mendoza has painstakingly compiled a body of work that is autobiographical, politically insurgent, and representative.