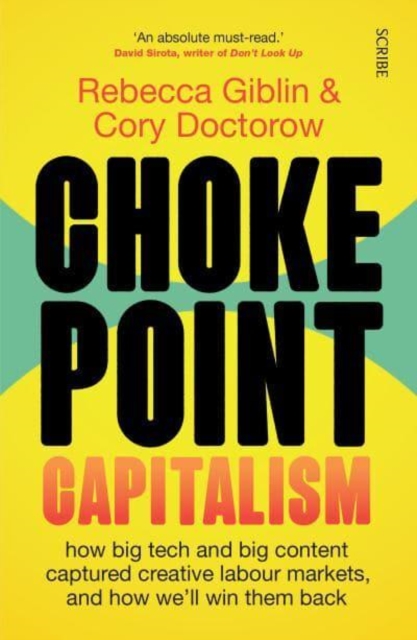 Chokepoint Capitalism : how big tech and big content captured creative labour markets, and how we'll win them back Paperback / softback

A call to action for the creative class and labour movement to rally against the power of Big Tech and Big Media. Corporate concentration has breached the stratosphere, as have corporate profits.

An ever-expanding constellation of industries are now monopolies (where sellers have excessive power over buyers) or monopsonies (where buyers hold the whip hand over sellers) - or both. Scholar Rebecca Giblin and writer and activist Cory Doctorow argue we're in a new era of 'chokepoint capitalism', with exploitative businesses creating insurmountable barriers to competition that enable them to capture value that should rightfully go to others.

All workers are weakened by this, but the problem is especially well illustrated by the plight of creative workers. By analysing book publishing and news, live music and music streaming, screenwriting, radio, and more, Giblin and Doctorow deftly show how powerful corporations construct 'anti-competitive flywheels' designed to lock in users and suppliers, make their markets hostile to new entrants, and then force workers and suppliers to accept unfairly low prices. In the book's second half, Giblin and Doctorow explain how to batter through those chokepoints, with tools ranging from transparency rights to collective action and ownership, radical interoperability, contract terminations, job guarantees, and minimum wages for creative work. Chokepoint Capitalism is a call to workers of all sectors to unite to help smash these chokepoints and take back the power and profit that's being heisted away - before it's too late.