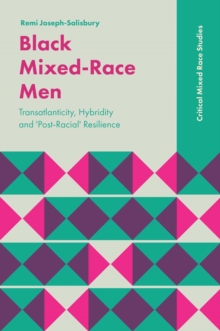 This is despite growing recognition of the particular ways race and gender intersect.

By centring the accounts of Black mixed-race men in the United Kingdom and United States, this book offers a timely intervention that extends the theoretical terrain of race and ethnicity scholarship and of studies of gender and masculinities.

As it treads new and important ground, this book draws upon theories of performativity and hybridity in order to understand how Black mixed-race men constitute and reconstitute complex and multiplicitous identities. 'Post-racial' conditions mean that Black mixed-race men engage in such processes in a context where the significance of race and racism is rendered invisible and denied.

By introducing the theoretical concept of 'post-racial' resilience, this study strives to capture and celebrate the contemporary, creative and innovative ways in which Black mixed-race men refuse the fragmentation and erasure of their identities.

As it does so, the author offers a corrective to popular representations that have too readily pathologized Black mixed-race men.

Focusing on the everyday through a discussion of Black mixed-race men's racial symbolism, experiences of racial microaggressions, and interactions with peers, Black Mixed-Race Men: Transatlanticity, Hybridity and Post-Racial Resilience offers an in-depth insight into a previously neglected area of scholarship.